From pesticides to pollinators, peat extraction to planning for wildlife-friendly landscapes, Friends of the Earth has always championed the need for strong and vigorous protection of the natural world. A healthy environment is essential for both people and wildlife. And it’s not just about the special designated sites, informal green spaces and even our gardens are increasingly of value to the intricate ‘web of life’.  The negative impacts facing the natural world include changes in agriculture, habitat loss, over-reliance on chemicals and now, climate change.

Here in Oxfordshire we are playing our part in highlighting the losses and gains. we are now (summer 2019) launching a major new campaign to double tree cover across Oxfordshire. Full details are on our Oxfordshire Trees for the Future page

One of our most visible campaigns has been work on pollinators, especially bees.

British bees are in decline and need our help! There are five simple actions that we can take to help bees and other pollinators:

The Royal Horticultural Society has useful lists of pollinator-friendly plants that you can download for reference and local ecologist Dr Judy Webb also has very useful information on helping pollinators in your garden.

Oxford Friends of the Earth has campaigned over several years to raise awareness of the threats to bees and to encourage action locally – from individuals and communities to local authorities. Friends of the Earth played a central role in changing national policy to protect bees and other pollinators, with Government introducing a National Pollinator Strategy and implementation plan in 2014. 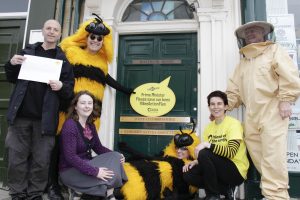 Delivering a Bee Cause petition to the Conservative office in Witney, Oxfordshire June 2013. The billboard displays the names of 10,000 people who are calling on David Cameron to save British bees. Witney was David Cameron’s constituency.

Creating a Buzz! is our lottery-funded project in which we worked with local faith communities to create bee-friendly habitats. Creating a Buzz! shows how people linked to any church, mosque, synagogue or other faith building can make the green spaces around them better for bees. The Creating a Buzz! toolkit is based on work done with a number of faith groups in Oxford and is written by local environmental expert and Oxford Friends of the Earth member Jan McHarry, who has extensive experience of working with faith groups.

Once a former refuse dump for Oxford City, The Kidneys Nature Park is a restored wildlife site and open public space nestled by the River Thames in East Oxford. Managed by Oxford City Council, working together with voluntary community groups, this beautiful nature park is enjoyed by the public.

In 2013, as part of the national Bee Cause campaign to reverse bee decline, Oxford Friends of the Earth created a 100 m2 wildflower patch, dubbed the ‘Oxford Bee World’, in the large grass meadow at The Kidneys. The site was initially prepared by volunteers over a couple of weekends and fondly remembered as ‘bee boot camp’. Grass was removed using a powered turf cutter followed by mechanical rotavation to break the dense network of grass roots, ready to sow wildflower seeds in early May. Over five years later, a variety of wildflowers continues to thrive in this patch and managed through the collaborative efforts of Oxford Friends of the Earth, Friends of Aston’s Eyot and Oxford City Council. Predominant wildflower species include salvia, yellow rattle, bird’s foot trefoil, wild red clover, lady’s bedstraw, yarrow, common knapweed, dandelion, selfheal, oxeye daisy and meadow buttercup. In 2014 and 2015, the main wildflower patch was expanded in addition to creating a number of smaller patches in the grass meadow with seeds sowed in September and always including yellow rattle to restrict grass growth. The grass meadow is cut annually by the City Council in late July/early August with the cuttings removed, however the main wildflower patch is left uncut until later in the year – October or November, as it’s usually still in flower with seeds still to bear. 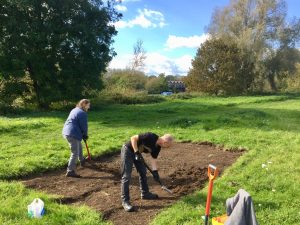 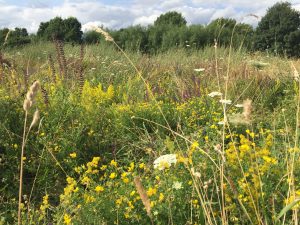 Wildflowers at The Kidneys, East Oxford.

Wildflowers are thriving at The Kidneys, but what about bees? In 2017, wild bee expert Ivan Wright conducted a survey of bees at The Kidneys from April to October. Ivan recorded nine species of bumblebee and 20 species of solitary bee (mostly mining bees) on flowers in the main wildflower patch and concluded that the sown wildflowers are of considerable benefit to bumblebees, but of limited benefit to solitary bees. In addition, he noted that there were very few bee-friendly flowers in early spring.

These findings reinforce that wildflower density and diversity are important to sustain many different bee species from spring to autumn. In response, we have sown more early spring wildflowers (such as coltsfoot and cowslip) as well as wildflowers for solitary bees (such as field scabious and autumn hawkbit). Our thanks to Ruth Ashcroft (Friends of Aston’s Eyot), Ivan Wright (Shotover Wildlife) and Oxford City Council for their continued support of this initiative.